Navaratri is composed of two words – “Nav” and “Ratri“. Nav means nine and ratri means nights. It is the festival dedicated to the worship of the Divine mother or Shakti. This is one of the biggest festivals celebrated in India. I came across this passage where Bhanumathi, Sri Sri ravi Shankar’s sister explains the Divine Mother.

We are all floating in the effulgence of one scintillating unseen cosmic energy called the ‘Devi’. The Devi or the Divine Mother is the womb of all creation. She is the seed of all dynamism, radiance, beauty, equanimity, peace and nourishment. She is the life force energy. A mother has total love for her child. The Divine Mother has unconditional and unquantifiable love for Her children which includes every being in this entire creation. 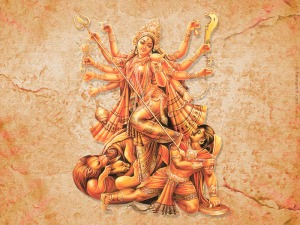 Durga means “Invincible”. She is a fierce Hindu Godess seen riding a Lion which symbolizes as alluding the aspect of courage and valor. She gives courage and strength to her devotees and destroys all the negative forces with in us. In her presence, the negative forces can not exists. Especially in the case of people suffering from anxiety, doubting oneself, doubting one’s ability, ‘lack’ consciousness, feeling threatened by enmity and negativity – simply by chanting the names of the Devis, it is like mantras that elevate your consciousness and you can become more centered, courageous and composed. This is the significance of the aspect of the Divine as Devi Durga.

Devi Durga is mostly seen killing a demon by the name Mahisasura. Mahisasura means the “Buffalo demon”.  Buffalo is a symbol of laziness, lethargy or inertia. Devi Durga gives us the strength and energy to destroy the laziness in us.

The second set of three days is for worshipping the Devi in the form of Lakshmi. Wealth is a vital ingredient bestowed upon us for the maintenance and progress in our life. It is much more than just having money. It means abundance in knowledge, skills and talents. Lakshmi is the energy that manifests as the complete spiritual and material well-being of a person. She is the consort of Lord Vishnu. She is said to bring in good luck and protect her devotees from all kind of miseries and finance related sorrows.

Lakshmi is depicted as a beautiful woman of golden complexion, with four hands, sitting or standing on a full-bloomed lotus and holding a lotus bud, which stands for beauty, purity and fertility. Her four hands represent the four ends of human life: dharma or righteousness, “kama” or desires, “artha” or wealth, and “moksha” or liberation from the cycle of birth and death.

Cascades of gold coins are seen flowing from her hands, suggesting that those who worship her gain wealth. She always wears gold embroidered red clothes. Red symbolizes activity and the golden lining indicates prosperity. Lakshmi is the active energy of Vishnu, and also appears as Lakshmi-Narayan – Lakshmi accompanying Vishnu. 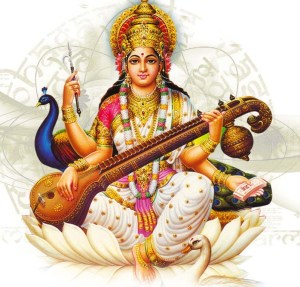 The final three days are dedicated to Saraswati. Saraswati is the goddess of knowledge- the one who gives the essence(sara) of the Self (swa). The name also means Saras – flow and wati – one who has got the flow. She is often depicted as being seated on a rock. Knowledge, like a rock, is a steadfast support. It stays with us at all times. She plays the veena, a musical instrument whose mellifluous notes bring harmony and peace to the mind. Similarly, spiritual knowledge brings relaxation and celebration into ones’ life.

Goddess Saraswati is the ocean of understanding and the consciousness which vibrates with different types of learning. She is the source of spiritual light, remover of all ignorance and the source of knowledge. Saraswati is strongly associated with flowing water in her role as a goddess of knowledge. She is depicted as a beautiful woman to embody the concept of knowledge as supremely alluring. She possesses four arms, and is usually shown wearing a spotless white saree and seated on a white lotus or riding a white swan.

When many people get together and do something collectively, that is called ‘yagya‘ or ‘yagna‘. There are many types of ‘yagya’.

These bring purity, prosperity, peace and harmony to all. The whole environment becomes lively. There are three types of miseries: one from outside world, other one from deep inside you, due to karma and the third one is due to the subtle mind. So Navratri is that which gives you rest from all three types of miseries. Mind works in action. When you sleep, what happens? You get relief from the world, relief from the mind, and relief from everything. That is why Navratri is called, the nine nights of complete self-referral activity. Tenth day of the ‘yagya‘ is the Victory Day, also known as ‘Dussera’.

The navaratri for 2012 starts this October 16th and goes on for the next 9 days. During these 9 days, Tte seeker gets back to the true Source through fasting, prayer, silence and meditation. Night is also called ratri because it brings rejuvenation. It gives relief at the three levels of our existence – physical, subtle and causal. While fasting detoxifies the body, silence purifies the speech and brings rest to the chattering mind, and meditation takes one deep into one’s own being.

Let us all have an intention this navaratri to do good to all the people around us!