Art of Living Foundation, founded by His Holiness Sri Sri Ravi Shankar, have been setting multiple world records all over the world which are recognized by the Guinness Records. Here are the records held by the foundation

The Art of Living hosted ‘Brahm Naad’, where 1,200 sitarists performed together on one platform, in a first-of-its-kind concert in Delhi, India. HH Sri Sri Ravi Shankar ‘s vision behind the two-day programme was to popularise India classical music and re-enforce the power of music in spreading peace and message. The sitarists came from different religions, castes and sections of society from India and various parts of the world. The diverse group included artists ranging from 6 -70 years of age, including visually challenged sitarists, child prodigies, young students from renowned schools of classical music and senior practitioners. HH Sri Sri Ravi Shankar said: “Music connects the individual to the universal spirit. Music is that rhythm and harmony that flows from the universal to the individual; from the cosmos to the finite.” Slated to find its way into the Guiness Book of World records, the proceeds from Brahm Naad are dedicated to the relief and rehabilitation of flood-ravaged Bihar.

The Art of Living has entered the Guinness Book of Records for a Mohiniyattam dance organised in Cochin, Kerala, INDIA in 2006. The performance had 1,200 women dance together.

The performance has been awarded the world record for the most people performing a Mohiniyattam dance, the traditional Kerala dance form.

The citation issued by the Guinness Book of Records states: “The current record for Most People Performing a Mohiniyattam Dance is 1,200 at a performance held as part of the Silver Jubilee celebrations of the Art of Living Foundation at the Jawaharlal Nehru International Stadium in Cochin, Kerala, on Nov 28, 2006.”

Performing together for the first time, the dancers enchanted a gathering of over 100,000 people with their depiction of feminine moods and emotions.

The largest choir consisted of 121,440 people and was organised by The Art of Living (India), in Perungalathur, Chennai, India, on 30 January 2011.

The organisation for the event used 2,429 stewards and the choir sang in unison for over 5 minutes.

The largest Kathakali dance was achieved by 150 participants at an event organised by the Art of Living Foundation, Kerala Chapter (India) at Putharikkandam Grounds in Thiruvananthapuram, Kerala, India, on 12 February 2011.

The attempt also included 15 musicians. Elaborate, traditional costumes were worn by all participants.

The dance, which was choreographed and led by distinguished Kathakali doyen Ettumanur Kannan, exhibited the essence of Art of Living’s meditation and devotional mood through well defined rhythmic movements, characteristic of Kathakali, and mudras (hand gestures). All the five different veshas (make- up) – pachcha, kaththi, thaadi, kari and minukku– famous in the Kathakali form of dance, were adorned by the artists. Even as thousands of people gathered at the venue to witness the grand spectacle, groups from around the world watched the webcast.

The largest bhangra dance included 2,100 participants and was achieved by The Art of Living Foundation (India) at the Punjab Agricultural University Campus, Ludhiana, India, on 11 November 2010.

More than 25,000 spectators attended the event including local media and politicians.

The largest buffet consisted of 5,612 different dishes in an event organised by the Art of Living Foundation (India) at Sri Sri Dham, Ahmedabad, India, on 2 November 2010.

The food was prepared by Sri Sri Ayurveda Cooker Club for a large crowd.

5,600 vegetarian Indian items prepared by devotees from across Gujarat were presented at the ANNAM BRAHMA, a unique event of celebration and contribution on the auspicious occasion of Diwali by The Art of Living.

The event was an attempt to enter the Guinness Book of World Records for its vastness of variety and quantity offered at one platform. The food was shared with underprivileged children as Bal Bhoj and was prepared by devotees from Ahmedabad, Kalol, Surat, Dholka, Nadiad, Dahod, Kalol and Ankleshwar.

At the satsang that followed, devotees participated with much enthusiasm and devotion. Gracing the occasion, Sri Sri Ravi Shankar said: “Food, tourism, clothing, music and dance, yoga and spirituality, Ayurveda and Information technology are the seven unique fields that India can showcase to the world.” Speaking about vegetarian food, Sri Sri said: “Even if 10 percent of the world’s population turned vegetarian, the problem of global warming can be considerably reduced.”

About 1 lakh people attended the event. Chief Minister Narendra Modi who was also present among other prominent dignitaries.

The food event was part of a string of events The Art of Living Foundation has organized in the past to foster and promote cultural heritage of India.

The largest dhol drum ensemble was achieved by 1,356 participants in an event organised by Art of Living Foundation at Shivaji University Ground, Kolhapur, India, on 21 February 2011.

The largest hand drum ensemble consisted of 1230 people playing tabla drums and was achieved by the Art of Living Foundation (India) at Humbarwardi Estate, Solapur, India, on 17 January 2012.

333 bagpiper players of all ages and from all over the country performed live in Sofia in front of an ecstatic audience , setting the world record for the Largest bagpipe orchestra, according to the World Record

The 333 Bulgarian folk musicians gathered in central Sofia late on Wednesday, blowing their kaba-gaidas – bagpipes from the Rhodope mountains in the south of the Balkan country – to set the first such Guinness world record.

Dressed in traditional colourful Rhodope costumes, bagpipers started with a famous folk song – Delyu Haidutin – which was included in a Voyager golden record with the songs and sounds of our planet and sent as a message to space by NASA in 1977. 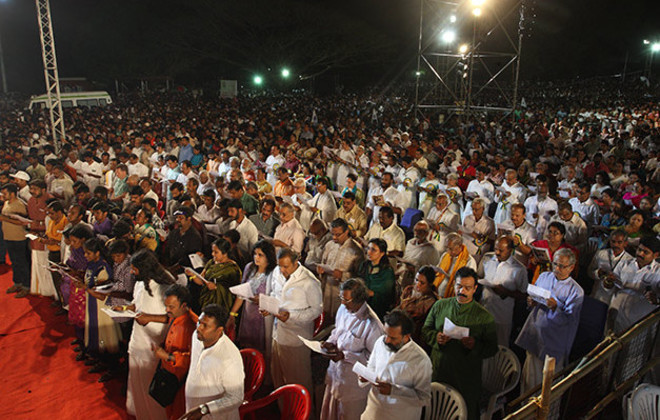 The largest horn ensemble consisted of 444 musicians and was achieved by Art of Living Foundation (India), in Kollam, Kerala, India, on 9 January 2013. The 444 musicians all played the C-shaped long Indian horn called the Kombu or Sringa. The performance lasted for 25 minutes.

The largest Tabla ensemble consisted of 1230 Tablas and was achieved by Art of Living Foundation (India), in Solapur on January ,17, 2012.

The Art of Living hosted a historic symphony – Antarnaad – bringing over 2750 Indian classical vocalists together on one platform. The top vocal performance has found entry in the Guinness Book of World Records for the largest number of people singing Vande Mataram, India’s national song
Conceived by Sri Sri Ravi Shankar, the aim of Antarnaad was to showcase the vast repertoire of Hindustani classical music as well as to provide a platform for the exponents of this ancient Indian art. Musicians from across the country, celebrity singers like Shankar Mahadevan and renowned names like Pt Rajan & Sajan Misra were also part of this event. The singers enthralled a live audience of over 200,000 people.