I saw this beautiful poster on Emma Seppala’s website. Thought of sharing it with my readers. Here is her website – http://www.emmaseppala.com/

I had promised to do a write up about prana, the various types and what its functions are in my previous post Prana and Food. So here it goes. This post if to introduce prana to those who dont know what it is, list the different types and its functions. Also explain how techniques like sudarshan kriya technique from the Happiness program of the Art of Living foundation deals with prana to provide good health and mind.

Prana is often translated to breath. However, prana is much more subtle than breath or the oxygen we intake. Breath is just the physical manifestation of prana. The inherent quality and force behind the motion of this creation is prana. It is present in anything and everything in this world. Animate or inanimate – doesnt matter. Every particle is throbbing with prana. Sometimes it is so subtle that we are not aware of it. A living entity is called as prani in sanskrit because it has got prana and consciousness in it. The quantum and quality of prana varies across different entities thereby giving each entity a unique characteristic. This is true for us human beings too. The quantum of prana of each individual is indicated by the power of the personality, which reflects one’s natural capacity to wield prana. Some persons are more successful, commanding and fascinating than others due to the level of their prana. All of us are born with a certain quantum of prana but the quality and quantity keep changing continuously as our thoughts, feelings and practices changes.

So where can we get more prana from? And do we change it ? Prana can be self generated and refined within us. One can work with one’s own prana to enhance vitality, will and strength, cure diseases, boost capability and efficiency, and evolve to a higher consciousness. In fact, one must work with prana shakti, force of prana, in order to perfect any experience in life. This is the aim of pranayama and prana vidya, which are tangible methods to enhance and guide prana. The yogis have devised techniques to measure prana which is based on how we exhale and inhale. Maximum prana is utilized by the brain. If the brain is not supplied with sufficient prana, the mind becomes restless and disturbed, and constantly dives into negative thoughts. For example, when we are hungry, we become irritable. The prana is low at that time and brain circuits are asking for more. When prana moves, the mind thinks and the senses perceive their respective objects. By developing sensitivity to prana, one becomes more aware of the subtle forces of the mind, which arise in the form of thoughts, feelings, emotions, responses, impressions, symbols and knowledge. By doing pranayama, we cultivate this awareness which helps is controlling the mind.

There are 5 major types of pranas in our body with each of them having unique and specific functions. There are called as pancha prana or pacnha vayus(pancha meaning 5 and vayu meaning air). They are prana, apaana, samaana, udaana and vyaana. These are responsible for creation and existence at the individual level. In human beings they are created during the first four months of development in the womb. Lets discuss these 5 pranas in detail now

1. Prana – This prana refers to the energy currents located in the thoracic region between the diaphragm and the base of the neck. It is the centre of circulation of life energy. This force maintains the heart and lungs, and all the activities in the chest region such as breathing, swallowing and circulation of blood. When the rate of breath or heartbeat increases due to strenuous work, etc. the level of sthoola prana also increases. This force is so essential that if its activity is obstructed or ceases for any reason, death may occur. When this is strong, then the heart is strong and does not suffer from high or low blood pressure. When the pathways of prana are not clear, the heart and lungs malfunction and there is poor intake of oxygen. At the mental level, one is not able to bring in positive impressions. It is difficult to concentrate or access intuitive knowledge.

2. Apana – This prana operates in the pelvic region between the navel and the perineum. It sustains the functions of the kidneys, bladder, bowels, excretory and reproductive organs. It is responsible for the expulsion of gas, wind, faeces, urine, semen and ova. It nourishes the foetus and expels it from the uterus at the time of birth. When apana is unbalanced, there is poor elimination, a feeling of being pulled down by gravity, depression and negativity.

3. Samaana – It operates between the navel and the diaphragm. The word samana is derived from the root saman, meaning ‘equal’ or ‘balanced’. Thus it acts as a balancer or equalizer for the two opposite forces of prana and apana. Samana activates and maintains the digestive organs and their secretions, and is responsible for metabolism. It is associated with the digestive fire, jatharagni. Samana, the equalizer, is dis-turbed whenever one’s mental peace and harmony are disturbed. Whenever there is turbulence in the body and the senses, samana becomes agitated and causes disorders. Poor assimilation of food is a result of samana imbalance, causing build-up of toxins as well as psychological blockage.

4. Udaana – This operates in the extremities: the arms, legs, neck and head. This prana is responsible for all the sensory organs,jnanendri-yas, and the organs of action, karmendriyas. It coordinates and controls the movements of the legs, arms and neck and directs the activities of the brain and sensory organs that are situated in the head region. These include: eyes, vision; ears, hearing; tongue, taste; nose, smell; skin, tactile sensation. Udana sustains the sense organs and their activities. The enjoyment of senses keeps udana active, because it functions according to their needs. An irregular udana causes breathing troubles, inefficiency in physical and mental work, inability to think clearly or express oneself, uncoordinated speech, weakened will and lack of cheer.

5. Vyaana – This pervades the whole body and acts as reserve energy. It helps all the other pranas when they require an extra boost. When one overexerts and feels extremely tired, a rush of energy comes, which enables one to continue. When vyana, the expansive energy, is unbalanced, there is lack of coordination, tremors, inability to reach out to people, and the mind is erratic.

This picture clearly shows where the different pranas operate in our body.

Along with these 5 major pranas, there are 5 other smaller or sub pranas. These are: naga, koorma, krikara, devadatta and dhananjaya. The pancha vayus are grosser and more limited manifestations of energy compared to the pancha pranas. Their functions are below.

Naga: This field of activity causes belching and hiccups. When the air element is agitated, naga becomes active and tries to throw the agitated air out of the stomach, causing vibrations in udana, prana and samana. Naga remains inactive as long as the diet and digestion are healthy. In the state of meditation, naga does not function.

Koorma: This field causes the blinking of the eyes and keeps the eyes healthy, moist and protected. It enables one to see all objects. The eyes shine due to the energy of koorma and one appears impressive.

Devadatta: This field causes sneezing and aids in respiration. It becomes activated by sharp or irritating smells and causes pain in the nostrils in more intense conditions.

Dhananjaya: This field pervades the whole body and is related to the organ of touch. It influences the work of the muscles, arteries and veins, and the skin. The swelling experienced during an injury is due to the motion of dhananjaya. During a tamasic state it reinforces sloth in the body.

In the course of daily life, worry and stress use maximum prana, so that the pranic fields become exhausted and discharged. This in turn causes fatigue, depression, and inefficient digestion and circulation. As this vicious cycle continues, the body does not have the strength to walk, work or think, and the smallest disturbance causes nervousness and anxiety. In order to remedy this, the pranas need to be charged constantly, so their functioning is optimized and balance is maintained. This is the first objective of pranayama, which charges and replenishes the pranas through the practices. When the pranas are sufficiently charged, they are awakened.

How does Pranayama & other techniques help?

When pranayama is practiced for a long time, the pranas are kept balanced and all organs of our body function normally. The number of thoughts in our mind becomes lesser which helps us to focus better. A breathing technique like sudarshan kriya balances all these pranas and helps in removing the existing toxins in our body. That is the reason a lot of people report huge health benefits after practicing the sudarshan kriya. I have heard a lot of people report that their asthma and lung related problems got cured. Some say their digestive problems have been cured and their digestion has improved. Others say their long time constipation and bowel movement related problems have vanished. All these are because the kriya balances out all the major pranas in the body. The lung related disorders were cured because the prana was balanced. The digestion disorder was taken care because samaana vayu was balanced. And Apaana vayu for elimination and bowel movement. The kriya takes care of the upa vayus too.

If you get a chance, learn some pranayama techniques or some kriya techniques, like sudrashan kriya, from a proper teacher or guru. Practice them and see for your self how the knowledge of these pranas and how you feel when you are able to balance them. Check it for yourself. Hope you learnt something from this long post!

(Thanks to the many, many books that I have read on Prana. Most of these information are from what I have collected from most of them. One book in particular is Prana and Pranayama by Swami Niranjananda Saraswati. Thanks again to these wonderful beings for sharing their knowledge with us!)

It is time for a new theme and new actions to be taken! I am excited! This week’s theme for all of us is Health and Well Being! With only three more weeks to go for the campaign to be launched, we have a lot of people interested in and signing up.

The theme for Pre-Campaign week 3 is HEALTH and WELL BEING!

As usual we have so many ways to do our random act of kindness in here! Here is my list

If you have any other interesting act of kindness, post them here!

I had earlier written a post on bad habits and on how to deal with them. Sri Sri Ravi Shankar says that we can take the help of different emotions we go through to fight against bad habits. Here is a link to that post. http://wp.me/p2LxU9-2L. Here is an image giving the top 10 habits that we have that causes damage to the brain. 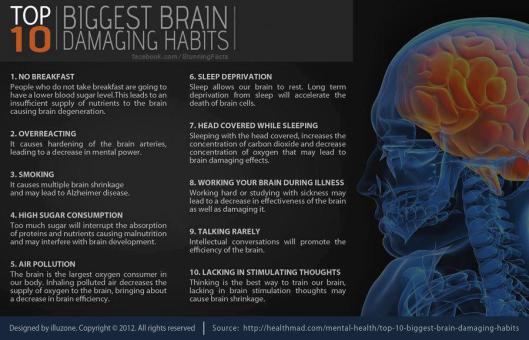 Habits that can damage the brain!

Some of the interesting things that fall into the top 10 are Not having breakfast, head covered while sleeping and talking rarely! Smoking is a no brainer :). Which of these do you have 🙂 ?!?